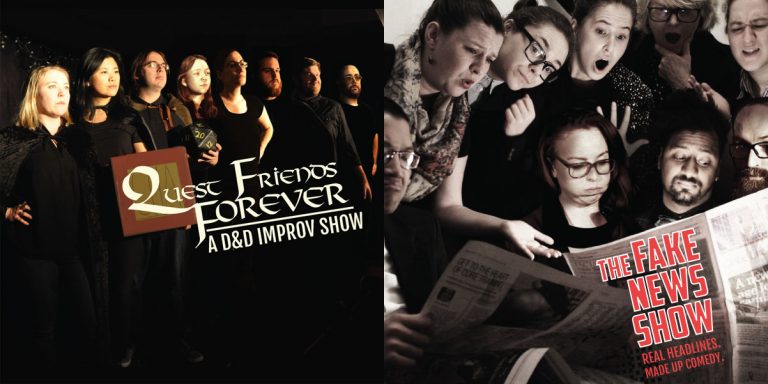 We are super pumped that members of the Improv Embassy family will be taking part in one of the most exciting theatre festivals in Ottawa! Yes, we’ve got two very, very different shows heading to the Ottawa Fringe Festival in June:

Join us for an amazing adventure, the like of which will never be seen again! Literally. Quest Friends Forever is a completely improvised fantasy adventure based on the classic role-playing game Dungeons & Dragons! The audience will control the story by rolling dice to aid (or hinder) the heroes. Will good prevail or will evil reign? It’ll be funny, it’ll be heartfelt and it. Will. Be. EPIC. Six shows, from Thursday, June 8 to Saturday, June 17. All at Academic Hall on the University of Ottawa campus. Get tickets here.

By combining actual news stories and improv comedy, The Fake News Show presents reality as it truly is: surreal. Think The Daily Show, The View, The Onion and Whose Line Is It Anyway all rolled into one sexy, truthy package. We’ll keep Trump jokes to a minimum – honest. Seven shows, from Thursday, June 8, to Saturday, June 17. All at the Improv Embassy (176 Rideau St, second floor). Get tickets here.

And some shows from friends of the Embassy…

DEB Talks: Some ideas are not worth spreading. In this for-profit solo character comedy show, you are invited to watch some of the most non-expert experts talk words at you. DEB Talks 2017 is sketch comedy all about the spirit of radically thoughtless ideas. From Embassy teacher Deborah Ring. Get tickets here.

LUB DUB seeks to create honest and genuine moments through improvisation & collaboration. Imagine one moment slow dancing to The Drifters, the next you’re creating a piece of art with found objects. Like a sketch show meets performance art meets an ask-me-anything, the result is performance that is vulnerable, prone to surprises and a unique & malleable experience for audiences to be a part of. All the way from Victoria! Also hosted at the Improv Embassy. Get tickets here.

Far into the future, humanity is living underground. The Earth’s surface has been rendered uninhabitable due to a massive catastrophe. One man and one woman are placed in a holding cell to continue the human race. As they grow closer to one another and dangerous secrets are revealed, they struggle to hold onto their humanity as the last of their kind… A science-fiction play at the Embassy. Get tickets here.